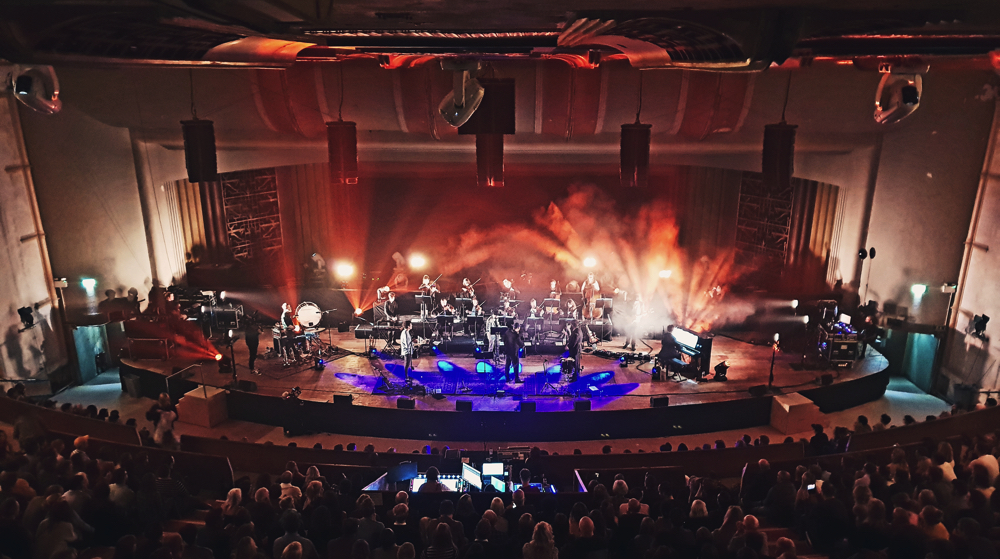 If you’ve ever had the pleasure of seeing a show at EartH Hackney then you’ll know just how special a venue it is. Very much a bit of a hidden gem off Stoke Newington Road, over the past year the multi-arts space has become a vibrant creative hub hosting an ever-enticing line-up of innovative artists. To celebrate their first birthday, they’re putting on a series of anniversary shows. Ahead of these, EartH team members Ava Szajna-Hopgood and Jake Wright share five tracks from their upcoming gigs.

Speaking on the venue’s first year Auro Foxcroft, founder of EartH Hackney and Village Underground, says “One year in, 200 shows on, we’ve evolved from a pigeon-filled art deco ruin to a new arts venue. It’s been a rollercoaster ride to bring this place back from the brink and to fill it with creativity, and people, and life once again. The building has come a long way and the construction work has just moved underground: we’re about to renovate the basements into EartH Studios, full of music-making equipment and inspiring education facilities. We’re opening up our spaces – in particular our new iteration of EartH Kitchen, which will be launching in September – for the communities around us to use, along with a low cost ticketing scheme for local young people. We’re excited to continue focusing on building our programmes with artists from around the globe over EartH’s second year, breathing even more life into our ever-expanding cultural centre.”

If you’ve not yet been to EartH Hackney then these anniversary shows are your perfect opportunity; I mean just look at that grandiose interior, it’s not your average venue! Ahead of the First Anniversary programme, which runs from 13th to 29th September, Ava Szajna-Hopgood and Jake Wright, two of EartH’s team, share a track from each of the five upcoming birthday gigs.

Italian duo Mind Against are Superstition favourites thanks to that unique percussive, techno style imbued in everything they produce. We can’t get enough of it! The pair’s latest single, Forevermore, is a personal highlight – it’s all about duality on this track. Lead by an unstoppable thumping baseline and assisted by atmospheric beats flowing in and out, Forevermore peaks with the addition of reverb-heavy warped vocals, before heading right back into industrial-grade techno. Despite being over eight minutes long, Mind Against don’t spare a second.

Surgeon’s Raw Trax 7 release feels like the meeting point of techno, acid and trance. The song is pure chaos, and at points there’s too many layers to decipher which beat is which. It’s this chaos that Surgeon excels in, creating pure wall-vibrating techno at its finest.

It’s nigh-on impossible to choose a track that represents the ever-enigmatic Jay Electronica properly: the New-Orleans-born, Roc Nation signee is yet to release a debut album, despite making countless cult-status tracks since 1995 – which you could commend as a reluctance to classify his sound with one body of work. In fact, Jay’s written about everything from splitting atoms to his time as a homeless person and psychedelic drugs. While long-time fans wait patiently to hear if reports of a 2019 album are anything more than a tease, Better In Tune With The Infinite is a sumptuous, spoken-word type rhyme featuring Elijah Muhammad and Professor Marvel that’s universal enough for some entry-level Jay fans, and betrays the breadth of his genre-spanning appeal – a solid EartH HQ fave.

Maisha – There Is a Place

There can’t be many corners of London’s burgeoning jazz scene that Shabaka Hutchings’ isn’t a part of. For this Shabaka-curated OneFest, we’ll have Maisha, Nat Birchall and Dave Okumu performing  alongside even more acts to be announced. We had to go with a Maisha track for this. Led by drummer Jake Long and fronted by Nubya Garcia (on sax and flute) album title track There Is a Place is a beautiful, soaring expedition into jazz’s new territory. Nubya’s flute is stunning here –  both wistful and meditative.

We love a September birthday! Worldwide FM’s 2nd birthday party was one of the first shows to ever take place at EartH, and we can’t wait to have the local radio station back here for their 3rd anniversary festivities. Location-wise, we’re in close proximity to Worldwide HQ and Brownswood, so it’s unsurprising Gilles Peterson’s selections have long-inspired our own selections on the EartH playlist. How do you choose just one track? Right now we can’t get enough of Worldwide regular and Gilles-endorsed Londoner Little Simz (she’s sold out her show at EartH in October) – at both feel good and casting a wry eye over her own outlook.