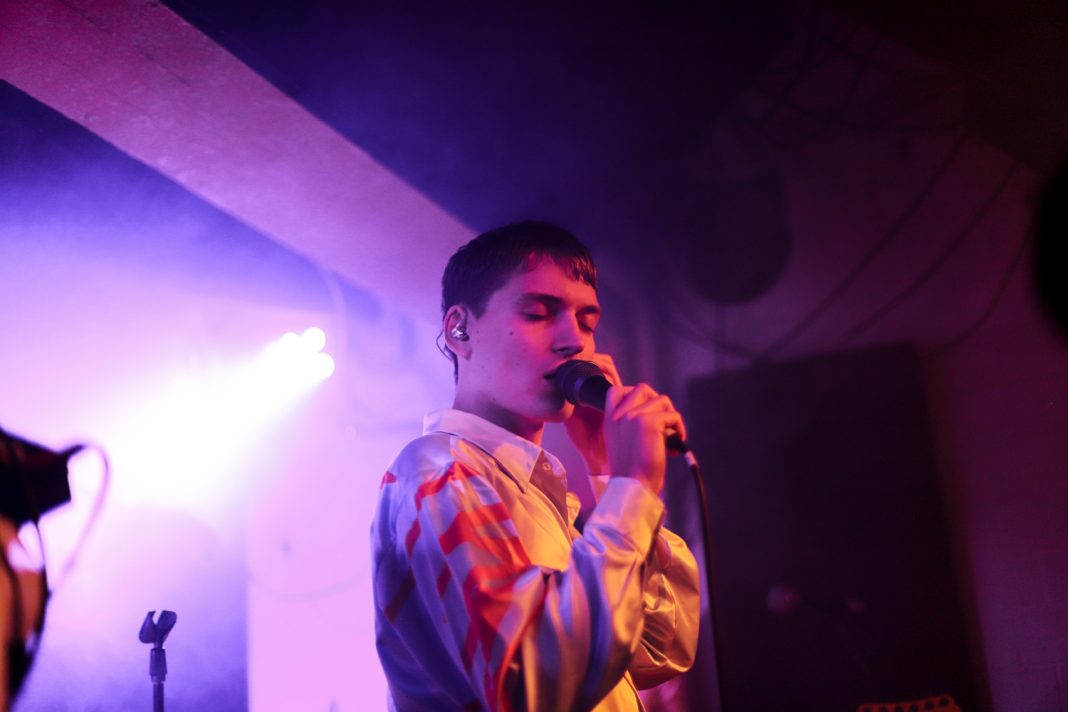 Entering the repurposed yard that houses Internet Explorer between now and its imminent demise, I’m met with a substantial but confused crowd, huddling to stay warm in an unheated stairwell. The vibe is one of pals-supporting-pals and, as we wait for the doors to open under the glow of a neon IE logo, you can’t help but feel that this is underground music at its best.

After a few incredibly well-priced drinks in what feels like a larger incarnation of a friend’s living room, the synthesisers and projections on the intimate stage come to life as the two musicians who comprise Ultraflex appear to a warm welcome. It’s their first Berlin show with this power project, although Norwegian, Kari Jahnsen [Farao] and Icelander, Katrín Andrésdóttir [Special-K] are separately some of Neuköllns most well-liked singer-producers.

What ensues is consistently-fun synth-pop, pumping and arpeggiating until everyone in the room is shuffling along. On stage, the pair appear cool and confident as they dip in and out of choreographed dance routines in perfect sync with the Jane Fonda-meets-Soviet workout videos projected behind them. The name ‘Ultraflex’ is indeed perfect, with their apparent aim of “just having as much fun as possible” being apparent throughout. The set feels over too fast for much of the audience, a pain soothed by the fact that they have a full album in the bag already, with singles out in the new year.

The mood remains high as an extended full-band version of Danish duo, GENTS get set-up and, casting an eye over them, they’re a ragtag bunch. Singer, Niels Fejrskov Juhl has the slick but unusual look of a male model, while another core member, Theis Vesterløkke, with his extensive technical setup, low cap and bleach-blonde ponytail could be fresh off of a trance tour. Meanwhile, the guitarist for the night is a dead ringer for 90s Brian Molko, albeit with a lot more guitar pedals which he makes very good use of throughout the night.

Niels’ voice sits somewhere between classic 80s frontmen – recalling The Human League or ABC – and otherworldly leftfield crooners like Hayden Thorpe of Wild Beasts fame. Even live, it sits clearly atop synth-pop banger after synth-pop banger, as the room is filled with genuine euphoria and dancing, eased along nicely by those 4,50€ Moscow Mules. At the core of their setlist though is GENTS’ acclaimed new album, Human Connection, a sentiment quite representative of what is felt throughout their show. There are heartfelt exchanges between the band, grateful for what they have achieved and are able to do for a living, and in turn, a crowd equally grateful for their music, which are willing to give back in honest devotion, filling up tonight’s venue for the first stop of their extensive tour.

It’s clear to see that these Copenhageners used to live right here in Berlin, if not from their sound then the confidence with which they’ve bonded with the crowd tonight. As a few responsible 9-5ers file out, not much is left to do but stick around to celebrate another great outing with Shameless/Limitless and one of the final ever shows at the mighty Internet Explorer.

Internet Explorer has since closed its doors in style, RIP IE.

Watch the video for ‘Right On Time’ here:

Tracks Of The Week // August 3rd