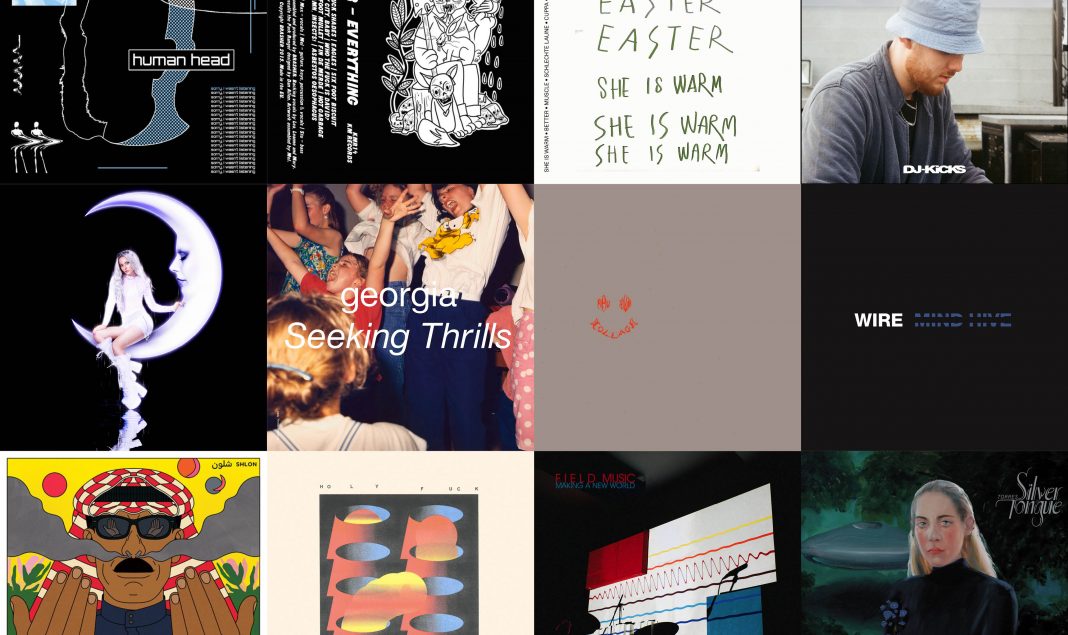 Hello, 2020. You look like you could benefit from a heap of great new releases to get you started.

Maybe it’s to be expected, but Hannah Diamond’s long-awaited debut album is, predictably, impossible to quit. After a heady first listen, I found myself craving the absolute joy only Reflections can provide, bouncy melodies rattling around my head for days after. To call it worth the (quite considerable) wait is an understatement.

We’re firmly in the demented nursery rhyme territory of PC Music here, with most tracks boasting the trademark glassy and fractured calling card, but it’s sleeker and more refined than anything we’ve heard from the imprint before. Perfectly polished, it seems the label’s long-standing mission of creating a new kind of popstar have been fully realised on Reflections.

Lyrically, Hannah Diamond ponders love in all its forms, including new-found, devastating loss and ultimately moving on, but any crying in the club is quickly washed away by A. G. Cook’s flawless production, armed with delirious melodies that detonate with irresistible euphoria.

The dizzying closer, ‘Make Believe’ is a prime example, drifting at glacial pace before stabbing synths shatter the quiet and transport us to trance parties of the past. ‘Love Goes On’ finds Hannah contemplating going it alone (“Maybe I’m good on my own / could it be time to let go”) as the track builds to a pounding crescendo and crashes down around her, while ‘Concrete Angel’ is one of the most bonkers tracks of 2019, its furious final minute featuring a gleeful and grin-inducing happy hardcore breakdown. As pop perfection goes, Reflections surely lands somewhere close. Lee Wakefield

Mura Masa has teased a new sound since the release of the dazzling, ‘I Don’t Think I Can Do This Again’ featuring Clairo earlier this autumn, but this is far from what could’ve been expected. Facing that dreaded sophomore album, the 23-year-old producer has turned the clocks back with RYC (Raw Youth Collage) to create a choppy collection of Britpop, new wave and 90s rave-inspired tracks.

This journey through adolescence is certain to divide long-term fans as moments like ‘Teenage Headache Dreams’, with Wolf Alice’s Ellie Rowsell signify a turn away from hip-hop influences to vocally-distorted, indie crooning over heavy club beats. However, there are glimpses of brilliance, such as ‘Deal Wiv It’ which features slowthai channelling a Mike Skinner bravado, the joyously funky Georgia collaboration ‘Live Like We’re Dancing” and ‘Today’, an enticingly delicate ballad with Tirzah. Georgia Evans

The sudden exit of two-thirds of the original formation of Sassy 009 came as surprise, considering that their esteemed debut EP was on heavy rotation throughout the Summer of 2017. As for Sunniva Lindgård, she took matters into her own hands, and along with co-producer Baya, she is now at the start of an exciting new beginning.

Now a solo endeavour, slight musical remnants of the past as a group are brought back, however, instead of the use of flutes among dazed soundscapes and catchy electropop sing-a-longs, the new Sassy 009 era is trailblazing, reactive and unruly, set to twist and turn any dancefloor along the way with its pulsating electronica. While Lindgård balances between havoc and renewal, KILL SASSY 009 doesn’t really ‘kill it’’; it makes her blatantly stand out. Francisco Gonçalves Silva 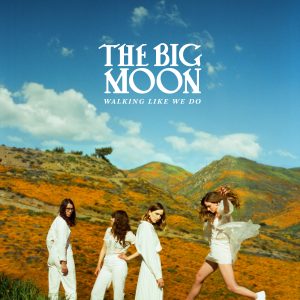 THE BIG MOON – WALKING LIKE WE DO
Fiction Records | January 10th

There’s a new Moon. It’s still full. But we’re seeing it from a different, distant, philosophical perspective. Whereas 2017’s stellar giant leap, Love In The 4th Dimension was packed with stratospheric, rocket-boosted, guitar-driven claims such as, “I’ll be formidable,” 2020 brings us the vulnerable, Earth-bound Walking Like We Do. Their debut showed them reaching up and scraping the sky. In contrast, The Big Moon’s return orbits around everyday human flaws.

Track one, ‘It’s Easy Then’, tells of “Waiting for the piano to fall,” epitomising the realistic sense of self-doubt that Juliette Jackson’s lyrics convey throughout. It also symbolises the bold sonic innovation they’ve made: the keyboard has landed. Surely, if Neil Armstrong were alive today, he’d proudly plant a bloody big flag on this album. Jon Kean

Five of the six tracks are full of bleeps and plucked strings as they hurtle you towards the dancefloor. But the heart of the album is revealed on beautiful slowburner ‘Mawwal’. It’s a traditional song about a love that lasts forever and provides a necessary ballast to its head-first dance tunes. Here, Souleyman’s singing seems to revel in the time and space to create something fragile. Geoff Cowart

High anxieties seem to have well and truly assimilated into the cultural zeitgeist of recent record releases, and even Holy Fuck’s fifth LP, Deleter cannot fully escape its ravages. From the start, on Alexis Taylor (Hot Chip) collaboration, ‘Luxe’, we are met with mumbling vocal samples (“I’d like to scrap all of it / start over again”) that saturate the song with palpable ennui.

Deleter ultimately acknowledges murkier depths than previous Holy Fuck recordings – for instance, ‘San Sebastian’ that churns with Krautrock-like precision. Yet the tenacious, rhythmic loops of the band’s oft-colourful electronic rock sporadically cradle us from being swallowed into a total funk, instead lifting us up into the funk. ‘Ruby’ finally purges remnants of a forlorn decade, amping up into a final, blistering crescendo to greet the future afresh. Harriet Taylor

From the buoyant pulse running through Making A New World, it is difficult to reconcile the album with the dark subject matter at its core. Born out of a project documenting the effects of the First World War for the Imperial War Museum, Field Music’s Making A New World is a 19-track-long walk through histories known and unknown.

The jaunty piano-led ‘Coffee or Wine’ tells of the anxiety felt coming home to a new world, while the sombre ballad, ‘A Change of Heir’ tackles the first gender reassignment surgery. Packed with ragged beats, jittery guitar riffs, and rippling funk bass, Making A New World balances historical documentation with creative exploration, giving you new ways to ponder over your history thesis on the dance floor. Stephanie Phillips

Ever forward thinking, Wire were post-punk before punk had even petered out in a pool of its own spittle. The pioneering spirit continues on Mind Hive, their umpteenth record in a back catalogue that contains no duffers.

As with most Wire albums on first listen, it’s a strange and at times uncomfortable experience. Bearing more similarities with industrial metal than their most revered, scratchy and melodic work, they masterfully channel foreboding doom with every rumble, clang and slap of their instruments. Even its jangliest turn, mid-LP highlight, ‘On the Beach’, seems in a rush to find shelter. While “it’s another solid record from Wire” might not be a particularly remarkable thing to declare, the fact it’s their 16th in a row absolutely is. Thomas Hannan

EASTER – SHE IS WARM
Self-release | Out Now

Stine Omar and Max Boss make devotional synth-pop and their incisive minimalism and irreverent spoken word are one of their strongest assets as a band. Two albums, two EPs and a self-produced soap opera brought the deserving attention to the project, curiosity never ceasing even in the moments of absence.

With a willingness to always transcend, Easter’s new EP, She Is Warm emerged after brainstorming on the hottest day of the year. With that idea as a concept in mind, the new set of songs, some released as singles through the course of the last two years, revisit their creative mannerisms, yet aiming at a different angle: less downer, going for upbeat and peculiarly warm, never neglecting the tender layers of dream-like observational gaze. Francisco Gonçalves Silva

Throwing his hat into the world’s most famous mix series, London born-and-bred producer, Kamaal Williams provides a 21st-century take on the soulful sounds of years gone by in the 70th instalment of the DJ-Kicks series. Whether he’s curating smooth, buttery jazz that’s filled with slick sax and sensual percussive elements, confronting the keys a la Herbie Hancock or, like an acid blues Jekyll and Hyde, transfiguring into his electronic music alias, Henry Wu, Williams demonstrates an impeccable taste that shows few limits of genre and mood.

He scrapes the firmament on joyful, disco-inflected occasions like ‘Southern Freeez’ by Freeez, tunnels into a smoky basement on a live recording of ‘Snitches Brew’ and slots in breakbeat-heavy garage with the inclusion of Japanese DJ Seiji’s ‘Buggin’ Out’. In a tribute to his hometown’s diverse underground scene, he presents a portrait of the sounds that rumble through the city. Georgia Marsh

After two projects co-produced with Rob Ellis (PJ Harvey), the fourth album from Mackenzie Scott, aka Torres, sees her debut as sole producer. The follow-up to 2017’s Three Futures, in Silver Tongue Torres continues in her sumptuous pop, rock and electronic hybrid, musing on love and desire; finding it, chasing it, fighting for it, losing it, understanding it.

According to Merriam Webster, to be of “silver tongue” is to be “marked by convincing and eloquent expression”. Silver Tongue is convincing, and fervent. At times, the swirling guitar engulfs the lyricism, obscuring Scott’s impassioned, narrative vocal; muddling the eloquence. The record is heavily textured: glittering synths meet driving percussion and punchy guitar, but for ‘Gracious Day’, a delicate, acoustic love song and one of the album’s stand-outs. “You moved in like a wave of quiet grace,” Torres sings — eloquence divine. Katie Thomas

Joe Clegg has always been a part of the creative team behind many of the UK’s leading pop acts, working as Mumford & Sons’ live music producer in recent months and, over the previous decade, working as musical director for Ellie Goulding. November marks the release of Clegg’s debut solo EP, Phoenix – a lo-fi instrumental blend of collaborations and drum-heavy, atmospheric beats.

Aptly-named opening track, ‘Arrival’, builds slowly into a crescendo of crooning synths, while ‘36+2’ moves towards a heavier, post-rock, industrial vibe. Lead single, ‘Pyramids’ later pulls the record back into a blend of trance-like beats and dream-pop influences, before ‘Vista’ marks a chaotic soundscape of electronic distortion. The record is an impressive feat – hardly surprising for someone with Clegg’s knowledge and experience – and undoubtedly captivating throughout. Ari Sawyer

Out via Berlin-based label Lemon Test, Secular Variation comprises four-tracks of otherworldly soundscapes, incorporating found sound, whispering voices, wilderness, transmissions and birdsongs. Hypnotic and fragile, Ave Grave’s ability to occupy space with his sound is immersive and requires detailed attention to crack the layers of symbiotic melodies. Its musicality visually projects a pure, freeing atmosphere. As such, sit back, relax and allow yourself to merge with it. Francisco Gonçalves Silva 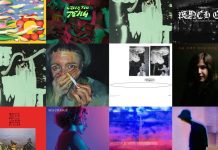 Releases Of The Month // November