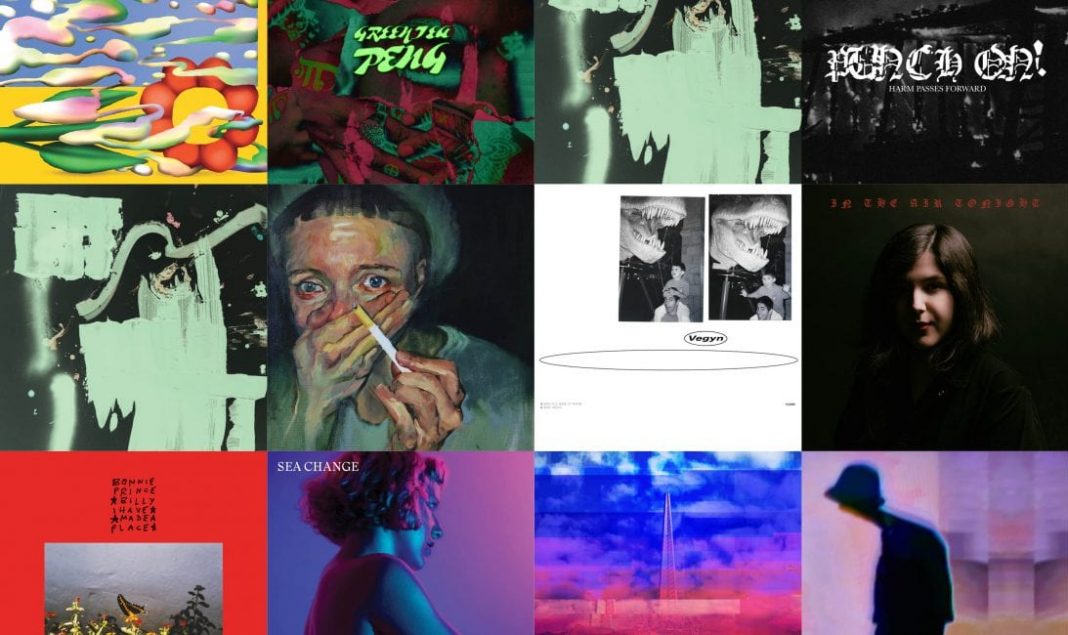 Heading into the season of goodwill and the season of ‘Album of the Year’ charts, might any of these releases be making a late run for inclusion?

When thinking about how to make a follow-up to her 2018 album, Historian, Lucy Dacus chose to opt out of the ‘normal’ way of releasing music. Sharing her new songs slowly throughout the year as a series of stand-alone singles, each loosely themed around a holiday or a season, 2019 is an eclectic mix of both original songs and covers that took an entire year to be revealed. It’s something the Virginia-born musician has called ‘slow music’, an attempt to release music as-and-when, in a low-stakes way that doesn’t have to adhere to any grand album release plan or concept.

It’s an approach that shows in the sheer variety of songs on the EP. Of Lucy’s own songs, ‘Forever Half Mast’ is a gentle, country-esque song released for Independence Day, exploring the complex guilt of being an American citizen in the contemporary age and ‘My Mother & I’, written for both Mother’s Day and Taurus Season, is a sparse, poignant song that contemplates what mothers pass on by genes and what they pass on through nurture.

But this feels strongly like a covers album, with Halloween, Christmas, Valentine’s Day and the technically-not-a-holiday of Bruce Springsteen’s birthday being celebrated via Lucy’s guitar-driven renditions of Phil Collins’ ‘In The Air Tonight’, Wham’s ‘Last Christmas’, Édith Piaf’s ‘La Vie En Rose’ and Bruce Springsteen’s ‘Dancing In The Dark’. Though it doesn’t sound coherent enough to seem like she’d planned to release the project as a full-length album, as a side-project, it’s given Lucy more space to experiment and she sounds all the freer for it. Rachel Finn

If you heard Young Guv’s Vol. I in August, you’d already be expecting another voluminous onrush of jangling indie-pop in the style of Teenage Fanclub, Sugar, The Charlatans or a non-Mancunian-non-lairy early Oasis on Vol. II. You’d be partly right. There are tambourines and sweet harmonies. There’s a Lemonheads moment on ‘Can I Just Call’, a whole lotta cowbell on ‘She’s A Fantasy’ and slightly fuzzed-up Fannies on ‘Try Not To Hang On So Hard’.

But aligned with the recent experimentation of Fucked Up, from whence Ben Cook metamorphoses into Young Guv, there’s saxophonic 80s chartbusting on ‘Caught Lookin’, dark disco on ‘Trying To Decide’ and the cabaret kitsch of ‘Can’t Say Goodbye’, which sounds like a tribute to the now-defunct travel agent, Thomas Cook. Jon Kean

I recall a time in recent memory when those in the cool indie circles turned their noses up at dance music, as though it could bear no true artistic merit, and was consequently snubbed publically in favour of some very bland guitar rock. How the tides have turned, and with it, a Giant Swan drifts into view.

The Bristol-based duo has been making the rounds for a few years now, but 2019 sees them drop their debut, self-titled release on the newly-minted Keck Records.

The Giant Swan name conjures an image of something monstrous and beautiful, which would also aptly describe the album’s sound. These are capital B.I.G. anthems, which effortlessly meld disarming post-industrial clamour and tweaked vocal loops into the fold of more familiar white-label grooves. Harriet Taylor

I’ll be the first to admit I judged Greentea Peng by her Shoreditch-via-Bali-via-Whole Foods stage name. But when ‘Risin’’, the lead single from Rising, started filtering through my headphones, I realised how wrong I was. Her tone is conflicting. The production is jumbled but simple, her lyrics melodic yet uncomplicated enough to mesh into one blissed-out version of itself.

‘Saturn’ is where she feels most authentic, “floating naked with you” on a calming synth wave and muted hi-hats that are reminiscent of Solange’s ‘Cranes in the Sky’. There are sexy saxophones slithering in and out of ‘Mr Sun’, nods to hazy summertime afternoons with friends and an air of sophistication wrapped around the EP that’s extremely promising for such a new face on the scene. Caitlin Scott

It’s been a prosperous year for Robert Alfons and his journey towards deconstructing his rooted notions of shame and loathing. TR/ST’s The Destroyer, in its two-part release, has proven to be a valuable testimonial of strength, while showcasing Alfons’ versatility as a songwriter and performer.

Where pulsating synths and devious lyrics elevated the maturity across the first half of the record, The Destroyer – 2 drowns itself in melancholy, as TR/ST strips down to the core while exploring new dynamics with instruments, allowing his freedom and creative expansion to thrive. Musical direction differs from that of his past, but by incorporating raw, truthful elements into his music, Alfons has created an inspiring record – and his most consistent to date. Francisco Gonçalves Silva

Dubbed the band’s “most collaborative and connected work to date,” Turnover’s latest offering evokes their signature dream-pop haze, detailing stories of change, love, loss and rediscovery. The aptly-named Altogether opens with a blur of jazz instruments and distant vocals, portraying a subtle, hushed intimacy from the very start of the record, before ‘Still In Motion’ dances through echoes of synth-fuelled guitar-pop.

Single release, ‘Parties’ embodies the uplifting transition between self-consciousness and self-acceptance, while ‘Ceramic Sky’ marks a sultry and soulful commentary on the process of falling in love. For every melancholic masterpiece scattered throughout Turnover’s back catalogue, Altogether has a track to remedy it. With an uplifting sound and fresh new perspective on the world, the album brilliantly highlights the importance of human connection and experience. Ari Sawyer

For a minute and four seconds on Harm Passes Forward, Punch On! present you with the most soothing solo guitar. There’s a slight crackle. A wee bit of reverb. You might start to imagine being the first to break ice on puddles, early one crisp January morning. Play it to a restless baby and you know that they would sleep. It has the heavy lightness of Explosions In The Sky. Then you’re reminded that they’re a screamo band, when it all kicks off.

Thereafter, apart from twenty-five seconds of quiet feedback seven minutes in, there’s merciless, relentless, shrieking bile, with guitar and drums reminiscent of the bombing of Baghdad in 2003. Play that to a restless baby and you can guarantee they’ll never sleep again. Jon Kean

Should songs tell a story? If you’re nodding, Jeffrey Lewis is your man. He’s a tongue-in-cheek New Yorker who draws comic books by day and is an energetic songwriter by night. While his tunes may appear shambolic, feisty and disjointed, they’re much more like three-minute masterpieces than mere doodles.

Take the charming autobiographical track ‘LPs’: it chronicles the gateway drug of cheap 60s rock albums that fed his teenage vinyl obsession. Or ‘My Girlfriend Doesn’t Listen’, with its bizarre shopping list of irrational fears that don’t bother his partner, including Charles Manson and agrarian reform. Lewis is ably supported by Mem Pahl (bass) and Brent Cole (drummer) as they make the fantastic real. And who could ask for more in a song? Geoff Cowart

25-year-old London producer, Vegyn may have reached recognition through his work with Frank Ocean, but his debut, Only Diamonds Cut Diamonds, feels distinctly personal. A bold sonic exploration into melancholia, the album darts between deft vocal samples, swift tempo shifts and sublime key changes for maximum impact, keeping listeners clinging on throughout the 16-song collection.

Standout tracks include ‘Nauseous / Devilish’, which pairs the grit of JPEGMAFIA’s rambunctious rapping style with erratic percussions, showcasing the producers hip-hop tendencies at their finest. Another moment of brilliance comes from a collaboration with Jeshi, a soothing blend of buttery vocals and gliding, computerised sounds on ‘I Don’t Owe You NYthing’, as well as the erratic choppiness of ‘Cow Boy ALLSTAR’, proudly displaying Vegyn’s comfort in experimentation. Georgia Evans

Four years on from her bewitching debut, Breakage, Norwegian artist, Ellen Sunde returns with a more mature record, loosely based on the concept of human-other animal metamorphosis. On INSIDE, Sunde explores the transformation via a crystal prism of the club music she’s indulged in across Berlin and LA.

‘Stepping Out’ takes rhythmic inspiration from techno’s industrial jabs, with Sunde pining anxiously over the top: “I hope my hooves will carry me/ My new body can set me free.” Before long, her escape is rewarded with steadier beats and soothing glow orb synths. Elsewhere, ‘Something Else’s creeping cacophony of feral sounds is dispelled by a hedonistic ‘four to the floor’ come-up. Sea Change has toyed with subverting expectations before; never has she done it so well. Charlotte Krol

Named after one of the largest volcanic features on the planet, Deccan Traps’ latest offering is as explosive and immense as you’d hope. Featuring five tracks of instrumental prowess, Terminal marks the band’s second and loudest release to date, just two years on from their self-titled debut.

An eerie electronic distortion opens the record, only to be torn apart by an influx of progressive guitar work, moving through a series of intricate soundwaves before highlight, ‘Drazic Park’, takes centre stage. While ‘I Am Quentin Bespoke’ moves toward a more aggressive, stormier atmosphere, ‘Tuvok’ lightens the tone somewhat, blending the same emotional intensity with more uplifting melodies and soaring guitars, before crashing into the heavy industrial influences of album closer, ‘Danalog’. Ari Sawyer 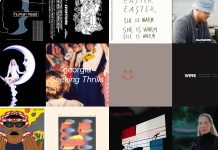 Releases Of The Month // January