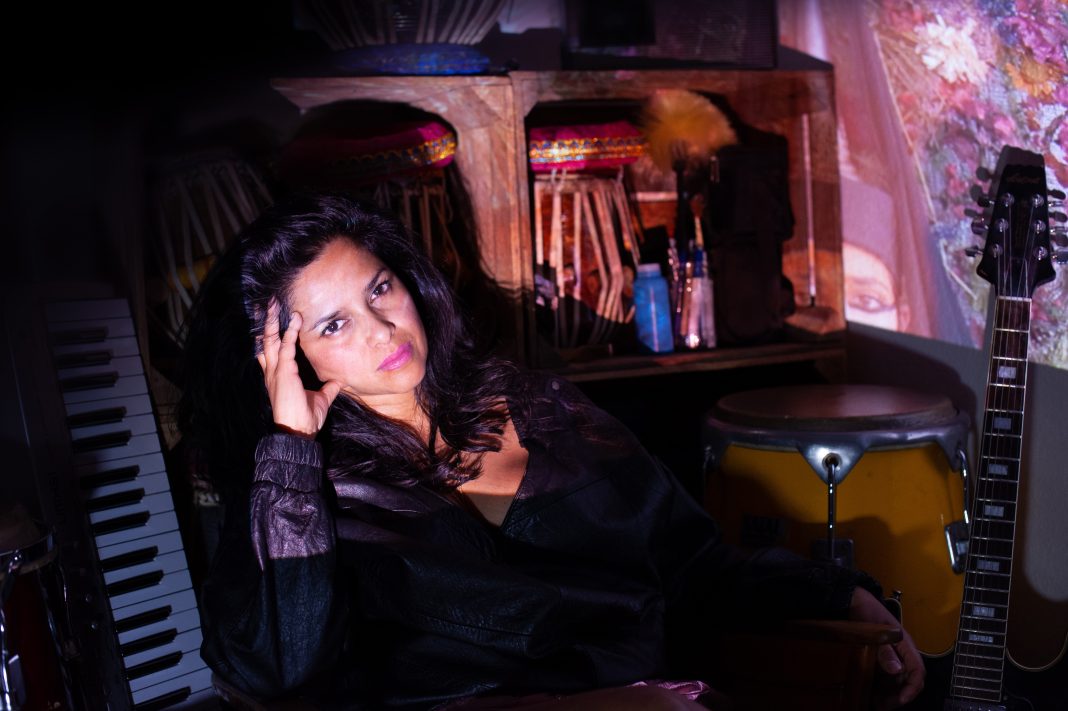 Throughout the years, British-Bengali musician Renu Hossain has gathered a pristine repertoire in several musical fields. Splitting her time between London and Berlin, the composer, producer, tabla- player, percussionist and curator – under her moniker RENU – explores the possibilities of ambient, ethereal textures and soundscapes based on certain emotions and how to best convey them.

Originally starting as a percussionist, Hossain has collaborated with the likes of Grace Jones, State of Bengal, Fun_da_mental, MIKA, Alabama 3 and Tunde Jegede, having studied with masters of the craft from India, Cuba, Spain and Brasil for twenty years. As a composer, she has worked for theatre, film and dance performances, later falling in love with electronics and music production.

With a handful of releases under her name, including acclaimed 2017 release, They Dance In The Dark, RENU’s latest offering, The Happening was initially written for Rachel Burn Dance and performed at the Place Theatre in London in 2015. It’s very much an immersive experience, intended as a soundtrack to people’s lives, aimed at moments introspection and self-reflection in these times of constraint.

For our latest ‘In Five’, we invited RENU to tell us which tracks best represent her as a musician, significantly influencing in her career up to this point. By naming your price, make sure to order The Happening here.

I don’t know if I knew this song before my friend and bandleader [Sam Zaman] died He was the godfather of the Asian Underground music scene in London. His music and band, State of Bengal, were responsible for so many artists to come out and be creative, including me. He never received the accolades he truly deserved. ‘Deep Blue Day’ helped me exorcise my sadness when Sam died…

My artist friend, Max Rademacher introduced me to this marvellous piece of music. It reminds me of a Fassbinder creation. Full of German ingenuity but what makes it really special is its ability to take you on a journey to another land, one full of sexual mystery and delights (without wanting to sound colonial – haha). Holgar Czukay made this whole tune using tape in 1979; it’s so ahead of its time. I can imagine these rows and rows of tape on washing lines while Holgar puts them all together. Apparently he listened to an Iranian radio station and recorded the vocals. Just genius.

This song just evokes a plethora of emotions. Indian classical music and song with Indian muslim influence, placed in the contemporary Bollywood setting of a movie. The film is based on an old story of Umrao Jaan. Umrao Jaan was a courtesan in the Moghul era of India. The original play is much more factual and less glossy than the film. The original is actually a metaphor for the demise of the Moghul Empire and the entering of a new one – The British Empire or The East India company. The original courtesans, all Muslim, held tremendous power wealth. After the East India Company gained power, a lot of courtesans were forced into sex work, their wealth and power stolen from them.

I think this song reminds me of my mother and how many people who migrate to another country not knowing when they will be back to their ‘homeland’. RD Burman was a prolific Indian musical director. In the golden age of Bollywood film (1970s), he was the main musical director for so many films. I love the playfulness and arrangements of his compositions – nothing is spared. Strings – ‘yes!’ Guitar – ‘yes!’ Tablas – ‘yes!’

I particularly like this recording of them performing in California. I love Indian classical music – it is my life long journey. I play tablas, an extremely difficult classical percussion / melodic instrument. The two artists featured here are some of the finest. I rarely record my tablas as I am so in awe of them. I always feel whatever I play will never be good enough. I go to India nearly every year to see my tabla guru and learn as much as I can… I think in my next lifetime I will be able to dedicate myself fully to it…

—
Follow RENU on Facebook for all the latest updates and support her on Bandcamp. Photo by Anna Kazanova.