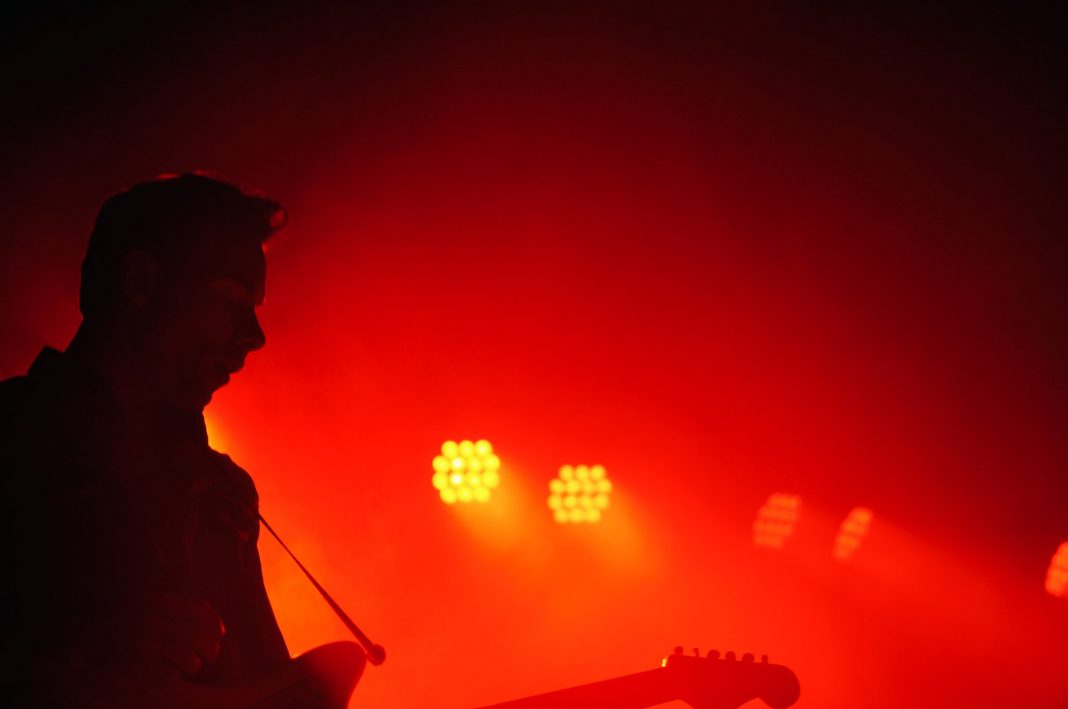 An eager crowd gathers to witness Black Marble, aka singer/songwriter/multi-instrumentalist Chris Stewart’s performance on Valentines Day. His life-affirming set at Bi Nuu, directly under U-Bahn Schlesisches Tor, has us safe in the knowledge that the cold-wave crew is still alive and well.

The intimate interior of Bi Nuu is suitably grungy, glowing with a red-lit smoky ambiance. Warming us up for Black Marble is an unclassifiable performance from the elusive Panther Modern, an LA-based, genre-bending performer who gives a rousing ode to synth-punk with an energetic set. Tinged with elements of techno and post-punk, he jolts along amid a pulsating, beat-driven performance, taking much from his recent EP, Los Angeles 2020.

The room fills considerably in the quick turnaround before Black Marble’s arrival. Kicking off the set is ‘Private Show’, a suitably nostalgic, bass-driven bop from his new album, Bigger Than Life, setting a warm tone in the room which remains throughout the set. Stewart’s effortless vocals are something quite special to behold, the crowd embodying that familiar 80’s post-punk/new wave sentiment between happy, sad and dancing made famous by the likes of Joy Division.

Hazy favourites such as ‘Iron Lung’ and ‘Woods’ off of the 2016, It’s Immaterial send the crowd into a state of gothic euphoria, and with these it is clear there are some hardcore fans amongst us. With each track, Stewart holds an atmosphere in this transient space, relying on consistent bass progressions and infectious drum patterns. The songs that shine out the brightest, however, are undoubtedly those from his seminal album, A Different Arrangement. ‘MSQ No Extra’ is dark yet hopeful in its catchy reprise, while closer ‘A Great Design’ is one of those familiar tracks that gets better with every repetition, Stewart’s droning vocals and playful synths curving together in a gem of a track. It’s the perfect ending to Stewart and longterm collaborator, Ty Kube’s slice of modern nostalgia.