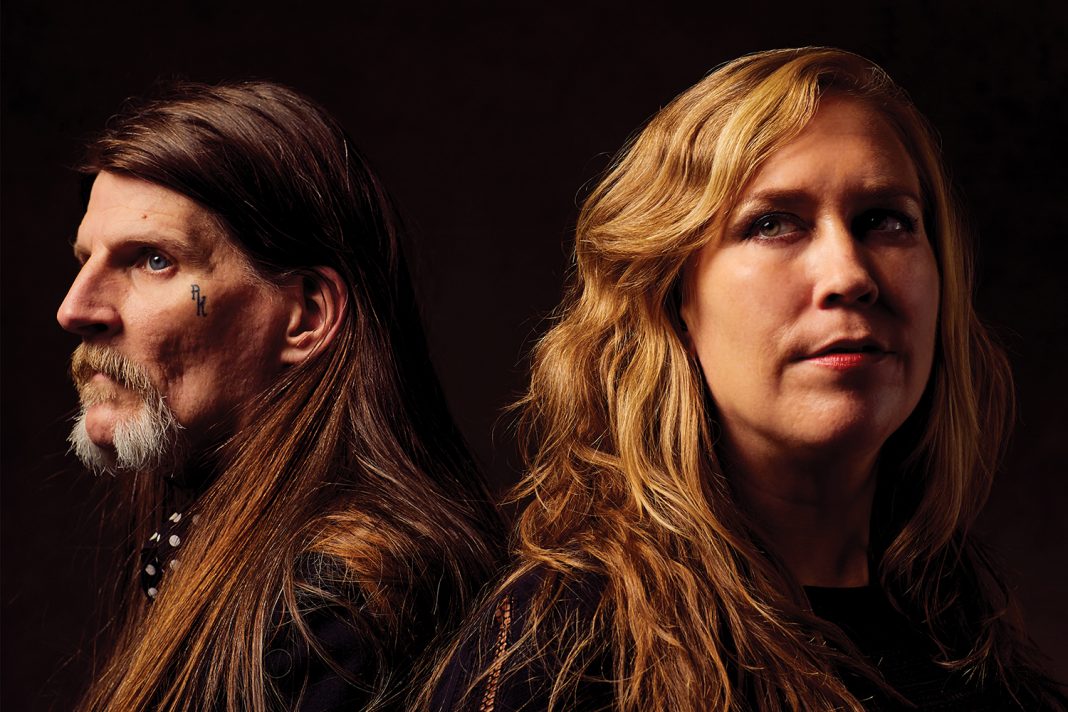 Once upon a time, it was just Indian classical musicians and arty oddballs such as Terry Riley who had mastered the power of the drone. Today, hypnotic psychedelia is all the rage with a whole genre of bands droning on and on and on.

Thankfully, the power of the drone remains incorruptible in the hands of a true master such as Dylan Carlson. The Seattle-born guitarist cites Black Sabbath and the Melvins as major influences and was close friends with the late Kurt Cobain. In the late Eighties, he formed Earth and began to record for his local label, Sub Pop.

Now age 51 and with serious drug, health and legal problems seemingly behind him, Carlson arrived at SO36 in Kreuzberg with an album full of new songs and two sublime bandmates – guitarist Tristan Jemsek and former wife/current drummer Adrienne Davis.

Dylan looks like he’s seen a fair bit of life. Gaunt, long-haired and wearing aviator sunglasses, he rattles off a few basic platitudes in German – and then lets his guitar do the talking. Their first song, ‘Cats on the Briar’, seemed to last about 20 minutes – but that’s just a rough guess. It’s very easy to lose track of time when you’re living in the drone. And when they stopped, the spell was broken and the crowd collectively returned from their mind-wandering mission into Earth’s orbit.

Long before he recorded his most recent album with Davies – titled Full Upon Her Burning Lips – he had perfected the art of the metal riff. But after a decade-long hiatus from the mid-Nineties, Carlson re-emerged and re-animated Earth with a more blues-infused sound.

His approach to playing live is still defined by volume, but with an impressive focus on clarity and detail. Every delirious power chord is delivered with superb precision, with Carlson brandishing his guitar like a pistol he’s just whipped from his holster and discharged. He studies it as the notes reverberate around the room, only to reload and return to the strings. It’s captivating to watch him, let alone listen.

Carlson’s playing offers a kaleidoscopic take on textures and tones that is constantly shifting, playing hide and seek with the logical part of your brain. First his guitar is aloft, then inspected closely, before he swaggers into another chord with a reverence that conjures up some worshipful practice. Across the stage, Jemsek does a masterful job of echoing and supporting Carlson’s riffs, without ever missing a step. Songs such as ‘The Colour of Poison’, ‘An Unnatural Carousel’ and an untitled new song follow in the same cosmic procession.

All the while, Davies is responsible for powering the band as she theatrically works her kit. She uses her bass drum to set up her exaggerated strokes and telegraphed stick work without wasting a beat or overplaying. It’s masterful – and just enough to keep Earth turning.

‘Descending Belladonna’ and ‘The Mandrake’s Hymn’ follow in the same vein, serving up more delicious riff-based jams and time-spinning sonic tribulations. ‘Russian Country at Dusk’ finishes off the set – making it almost exclusively culled from their new album. Not that you can really tell; the music itself is almost timeless in its cinematic sprawl and expansive American vibe.

“It sounds like you want to hear another one,” quipped Carlson in his broad drawl at the end of the set. Decked out in a crisp blue dress shirt with white flourishes, he nodded in acceptance and picked up his guitar again. Only this time, the band reach a bit further back in their discography to find ‘Old Black’ from 2011 album, Angels of Darkness, Demons of Light 1. “It’s a song about a cat, a guitar and a tour van,” he added, before launching into the rousing, bone-crusher of a finish after 90 minutes of transcendental drone joy.

Listen to ‘Cats on the Briar’ here: