It is said that the most honest form of expression comes from a place of pain. Through endurance and resilience, it morphs into a representation of strength, progress and transparency. For Cologne-based producer, Reba Fay, she’s familiar with adversity, having previously experienced chronic illness and body dysmorphia. Through her music, poetry and other bodies of work, Swan Meat became a vessel against her struggles and, quickly, one of the most prominent new acts in the electronic scene.

Out via Infinite Machine, Swan Meat’s third EP, FLESHWORLD draws inspiration from video games, anime soundtracks and orchestral arrangements. Through detailed sound design and the incorporation of breakbeats, harpsichord arpeggios and other unexpected elements, Fay’s expression is abrasive, visceral and direct, constructed with layers of reflection and intentional disruption.

After a stunning set at Diskothek Melancholie 2 this past February, the release of FLESHWORLD and her latest single compilation, we invited Reba Fay to give us insight into Swan Meat’s realm, sharing with us her vision and inspirations.

I wrote most of FLESHWORLD while I was on tour binge-listening to all the different Ys games soundtracks. I’m a guitar player, so the guitar solo on this song stuck with me throughout the whole process of writing the EP; rather than a collection of loops, I wanted the melodies on FLESHWORLD to feel analogous to a solo musician letting the music take them away. On my track ‘SATAN’S PRESET’, I thought of this, too, albeit with a MIDI piano – like, what if a pianist just jumped in at the end of the track and started soloing over the Vocaloid?!

Two of the elements I wanted to recall whilst working on FLESHWORLD were old-school movie soundtracks – those big, bombastic iconic ones – as well as old-school breakbeats. This track has both in spades, and it probably comes as no surprise that I play it in almost every DJ set of mine. My heart drops EVERY time that Halloween melody sample comes in. Tracks like this one were probably the biggest source of inspiration for songs like ‘EUGENIA MARIONETTE’ and ‘SUCKLING’.

Shovel Knight OST – In the Halls of the Usurper (Pridemoor Keep)

When I wrote the song ‘LITERALLY SEETHING’, I was one hundred per cent intending to recall the darker/dungeon-tinged levels of old-school N64 platformers. The song starts out with a chaotic chiptune trap intro and builds and builds (that’s that anxiety you feel while consistently coming up against obstacles in your path to level-completion!) and then settles – success! – into this more straight-forward, kind of donk-infused loop. The game I thought about the most while producing this one was Shovel Knight, the soundtrack to which has basically defined my life for the past three years.

I made ‘SUCKLING GROWN’ with the intent to make a ‘simpler’ club edit of ‘SUCKLING’, but of course, it turned into a beast of its own. It was clear, however, that I need a massive booming kick sound. In between sessions of working on ‘SUCKLING GROWN’ I’d walk around my block super fast while listening to this Randomer track on repeat. If I could get a kick sound even a modicum of a fraction as big as his, I thought, I’ll have done well.

The Fall of Troy – I Just Got This Symphony Goin’

This one might seem a bit out of left field, but as a producer / songwriter / composer / whatever you want to call it, The Fall of Troy stands above pretty much all as my greatest Quelle of inspo, particularly their Doppelganger album. Their tracks are so carefully put-together and heavily detailed and constantly keep me on my toes, switching from key to key and time signature to time signature with deft. My dream is to replicate this sound, or this feeling, this idea, in electronic music. I’ve been trying, and I don’t know if I’m there yet. Hopefully someday. 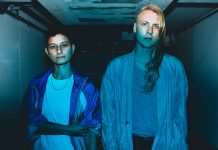 We Will Kaleid // In Five